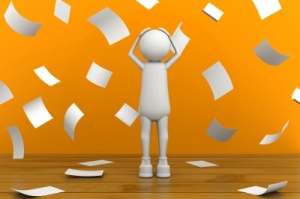 Has your boss ever started huffing and puffing, even when everything is going to plan and to deadline, and you can’t help but start to feel the pressure too? Or how about you’re watching a tense moment on TV and you feel yourself far more stressed than you should?

Scientists say stress could be as catching as the common cold. Just being around stressed individuals, or watching them stress out, raises levels of the stress hormone cortisol even if you’re an observer. This was the main finding of a study by the Max Planck Institute for Cognitive and Brain Sciences in Leipzig and the Technische Universität Dresden. The researchers found that observing stressful situations has a physical response – and say that this form of ’empathic stress’ should not be ignored because it can lead to serious issues of burnout, depression and anxiety.

Empathic stress was worse when the observer stressed individual were in a relationship. But even watching stressful programmes on TV can raise cortisol levels. “Stress has enormous contagion potential,” say the researchers.

They added that people working as caregivers could be particularly susceptible to the harmful consequences of empathic stress. “Anyone who is confronted with the suffering and stress of another person, particularly when sustained, has a higher risk of being affected by it themselves,” they add.

Interestingly, while other studies have shown women to be more empathic than men, this piece of research showed that “men and women actually experience empathic stress reactions with equal frequency”.

2 thoughts on “Have you caught ’empathic stress’?”