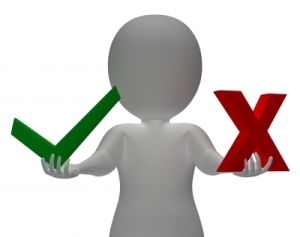 The part of the brain responsible for flexible decision making is affected by anxiety. (pic courtesy of freedigitalphotos.net/StuartMiles)

Anxiety is known for its impact on our emotions, especially its connection with fear, but new research suggests that anxiety can also affect the brain’s ability to make good decisions.

Scientists at the University of Pittsburgh did a study into a part of the brain called the prefrontal cortex (PFC), which is said to be “critical for flexible decision making”. They monitored this region of the brain in anxious rats who had to make decisions how to get a reward. The rats completed the task – as people living with anxiety would also complete tasks – but they made more mistakes in their decision making than the non-anxious rats “when the correct choice involved ignoring distracting information”. The scientists concluded that anxiety leads to bad decisions when there are distractions going on. And bad decisions made under anxiety would numb and weaken the PFC neurons responsible for making choices – which seems to be creating an anxious loop.

“We’ve had a simplistic approach to studying and treating anxiety. We have equated it with fear and have mostly assumed that it over-engages entire brain circuits,” said study author Bita Moghaddam, a professor in the Department of Neuroscience. “But this study shows that anxiety disengages brain cells in a highly specialised manner. Human anxiety is devastating, not merely because of how the person feels, but also because it can interfere with nearly all aspects of daily life, including decision-making.”

My conclusion from this is that we will all suffer anxious moments, and even periods of distressing anxiety. The key is not to identify with the anxiety, and not to act from those anxious feelings. Take time for the anxiety to subside, and then take stock and make a choice from there.