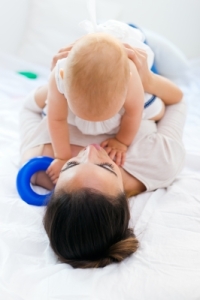 Research says the brain structure governing emotion can be passed down from mother to daughter (pic courtesy of nenetus/freedigitalphotos.net)

The structure in the brain that governs emotion – including susceptibility and resistance to depression – is more likely to be passed from mother to daughter than from mother to son, or from fathers to their children, according to new research carried out at the University of California–San Francisco (UCSF).

The study examined MRI scans of the corticolimbic system in the brain, which regulates and processes emotion, and has a part to play in mood disorders such as depression, to examine the relationship between generations. The researchers looked at these brain structures within 35 families, and say that the findings suggest the first evidence that depression can be passed on from mothers to daughters.

Women are statistically more likely to suffer from depression and anxiety than men. However, this new study does not say that mothers will automatically pass depression onto their daughters. Lead author Fumiko Hoeft, a UCSF associate professor of psychiatry, said: “The finding does not mean that mothers are necessarily responsible for their daughters’ depression. Many factors play a role in depression: genes that are not inherited from the mother, social environment, and life experiences, to name only three. Mother-daughter transmission is just one piece of it.”