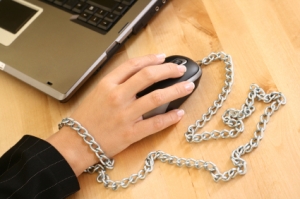 60% of people say they use the internet compulsively, says research (pic: istockphoto.com/matka_Wariatka)

It’s Monday morning. You log onto your emails at work and yet there are no surprises. Why? Because you’ve had your smartphone by your side all weekend and you’ve been checking your emails compulsively, unable to switch off. You see ‘relaxing’ as a pointless waste of time. Pushing yourself harder to achieve career success is what drives you. But it can also be what drains you.

If you recognise yourself here, then you could be among the 60% of workers who use the internet compulsively, often as a coping strategy. Increasingly it is high-fliers and overachievers whose internet usage can be excessive and compulsive, rather than students and the unemployed. That’s according to research among 516 people aged 18 to 65 by Dr Cristina Quinones-Garcia of Northampton Business School and Professor Nada Korac-Kakabadse of Henley Business School, which was presented at the British Psychological Society’s Division of Occupational Psychology’s Annual Conference in Brighton.

Using the internet was strongly linked to working obsessively, and overuse of the internet could lead to “measurable withdrawal symptoms” such as anxiety, isolation and depression. The researchers said that workaholics will often wake up several times in the night to check their emails, and their health and relationships suffer because they can’t manage to tear themselves away from their computer. They tend to be the high-achieving successful employees, but continued compulsive usage could lead to burnout.

This research is the latest in a growing body of evidence around the dangers of excessive internet use. A study by Missouri University of Science and Technology investigated the impact of heavy internet use on mental health and found that young people who used the internet excessively – including games, social media and email – showed signs of addictive behaviours, such as introversion, craving, loss of control and tolerance.

The Guardian offers five ways to curb your internet use and get your life back. However, if you’re worried that your internet use is getting out of control and having a negative impact on your life, email davanticounselling@gmail.com or call 07956 823501 to take the first step to speak to a therapist about it.